Ah, Pi Day: A glorious March holiday offering plentiful opportunities to share cheesy puns and jokes on social media, eliciting groans worldwide. (Why shouldn’t you talk to pi at a party? Because it goes on forever.)

This year, let’s recall the true meaning of Pi Day: Math. We’ve gathered a selection of some of our best books on numbers and mathematics—including a collection of engaging mathematical games, a coloring book inviting readers to explore the beauty of math visually, a study of mathematical principles in the natural world, and more.

Because after all, Pi Day shouldn’t just be for puns: It’s for serious mathematics grou-pi-es.

This book presents a series of engaging games that seem unsolvable—but can be solved when they are translated into mathematical terms. How can players find their ID cards when the cards are distributed randomly among twenty boxes? By applying the theory of permutations. How can a player guess the color of her own hat when she can only see other players’ hats? Hamming codes, which are used in communication technologies. Like magic, mathematics solves the apparently unsolvable. The games allow readers, including university students or anyone with high school–level math, to experience the joy of mathematical discovery.

Want to try your hand at an unsolvable math problem? Download an example here, which asks you to cleverly hang a picture on a wall.

“Full of clever and carefully constructed puzzles that will entertain any mathematically curious reader, from novice to expert.” —Richard J. Samworth, University of Cambridge

Most people think of mathematics as a set of useful tools designed to answer analytical questions, beginning with simple arithmetic and ending with advanced calculus. But, as Mage Merlin’s Unsolved Mathematical Mysteries shows, mathematics is filled with intriguing mysteries that take us to the edge of the unknown. This richly illustrated, story-driven volume presents sixteen of today’s greatest unsolved mathematical puzzles, all understandable by anyone with elementary math skills. These intriguing mysteries are presented to readers as puzzles that have time-traveled from Camelot, preserved in the notebook of Merlin, the wise magician in King Arthur’s court.

“This unique book will charm and delight mathematical explorers of all ages with its beautiful illustrations, captivating story, and unsolved mathematical challenges that range from geometry to number theory and more.” —Forbes

Beautiful Symmetry: A Coloring Book about Math by Alex Berke

Beautiful Symmetry is a coloring book about math, inviting us to engage with mathematical concepts visually through coloring challenges and visual puzzles. We can explore symmetry and the beauty of mathematics playfully, coloring through ideas usually reserved for advanced courses. The book is for children and adults, for math nerds and math avoiders, for educators, students, and coloring enthusiasts.

Are you itching to color? Try this example. Can you see the rotations in the pattern below? This entire pattern can be rotated by 180° so that each piece of the design will land on an identical piece, leaving the entire pattern visually unchanged. Your challenge is to color the pattern in a way that maintains this shiftable pattern, using as many colors as possible. (Right click the image to save, then print it out and color it in; or download the image here.) 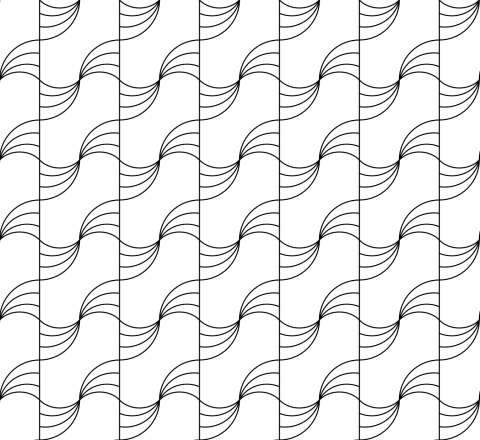 “This is deep math without numbers, equations, or answers. It is an invitation to feel math, viscerally, as a starting point or as an end in itself.” —Eugenia Cheng, author of The Art of Logic in an Illogical World

Everyday Chaos: The Mathematics of Unpredictability, from the Weather to the Stock Market by Brian Clegg

The math we are taught in school is precise and only deals with simple situations. Reality is far more complex. Trying to understand a system with multiple interacting components—the weather, for example, or the human body, or the stock market—means dealing with two factors: chaos and complexity. If we don’t understand these two essential subjects, we can’t understand the real world. In Everyday Chaos, Brian Clegg explains chaos and complexity for the general reader, with an accessible, engaging text and striking full-color illustrations.

“He still manages to surprise me with something new on every page.” —Alain de Botton

Thinkers have been fascinated by paradox since long before Aristotle grappled with Zeno’s. In this volume in the MIT Press Essential Knowledge series, Margaret Cuonzo explores paradoxes and the strategies used to solve them. She finds that paradoxes are more than mere puzzles but can prompt new ways of thinking. A paradox can be defined as a set of mutually inconsistent claims, each of which seems true. Paradoxes emerge not just in salons and ivory towers but in everyday life. (An Internet search for “paradox” brings forth a picture of an ashtray with a “no smoking” symbol inscribed on it.) Proposing solutions, Cuonzo writes, is a natural response to paradoxes. She invites us to rethink paradoxes by focusing on strategies for solving them, arguing that there is much to be learned from this, regardless of whether any of the more powerful paradoxes is even capable of solution.

Lumen Naturae: Visions of the Abstract in Art and Mathematics by Matilde Marcolli

This is a book about art—and a book about mathematics and physics. In Lumen Naturae (the title refers to a purely immanent, non-supernatural form of enlightenment), mathematical physicist Matilde Marcolli explores common themes in modern art and modern science—the concept of space, the notion of randomness, the shape of the cosmos, and other puzzles of the universe—while mapping convergences with the work of such artists as Paul Cezanne, Mark Rothko, Sol LeWitt, and Lee Krasner. Her account, focusing on questions she has investigated in her own scientific work, is illustrated by more than two hundred color images of artworks by modern and contemporary artists.

“In this unique book, Matilde Marcolli describes what modern art looks like through the lens of mathematical physics. Lumen Naturae is an invaluable interdisciplinary resource.” —Lynn Gamwell, School of Visual Arts in New York; author of Mathematics and Art

Foolproof, and Other Mathematical Meditations by Brian Hayes

Brian Hayes wants to convince us that mathematics is too important and too much fun to be left to the mathematicians. Foolproof, and Other Mathematical Meditations is his entertaining and accessible exploration of mathematical terrain both far-flung and nearby, bringing readers tidings of mathematical topics from Markov chains to Sudoku. Hayes, a non-mathematician, argues that mathematics is not only an essential tool for understanding the world but also a world unto itself, filled with objects and patterns that transcend earthly reality. In a series of essays, Hayes sets off to explore this exotic terrain, and takes the reader with him.

“Each of these essays brings unexpected twists of perception and presentation; what a fine imagination Hayes has! I enjoyed the book enormously.” —Nick Trefethen FRS, University of Oxford

The Beauty of Numbers in Nature: Mathematical Patterns and Principles from the Natural World by Ian Stewart

From a zebra’s stripes to a spider’s web, from sand dunes to snowflakes, nature is full of patterns underlaid by mathematical principles. In The Beauty of Numbers in Nature, Ian Stewart shows how life forms from the principles of mathematics. Each chapter explores a different kind of patterning system and its mathematical underpinnings. In doing so, the book also uncovers some universal patterns—both in nature and made by humans—from the basic geometry of ancient Greece to the complexities of fractals.

Sleight of Mind: 75 Ingenious Paradoxes in Mathematics, Physics, and Philosophy by Matt Cook

Paradox is a sophisticated kind of magic trick. A magician’s purpose is to create the appearance of impossibility, to pull a rabbit from an empty hat. Yet paradox doesn’t require tangibles, like rabbits or hats. Paradox works in the abstract, with words and concepts and symbols, to create the illusion of contradiction. There are no contradictions in reality, but there can appear to be. In Sleight of Mind, Matt Cook and collaborators dive deeply into more than 75 paradoxes in mathematics, physics, philosophy, and the social sciences. As each paradox is discussed and resolved, Cook helps readers discover the meaning of knowledge and the proper formation of concepts—and how reason can dispel the illusion of contradiction.

“A monumental achievement written so that it can be enjoyed as pure fun. Matt Cook takes us on a guided tour of some of the most vexing problems in logic, physics, math, and beyond. Full of brain teasers, if not brain breakers.” —Lee McIntyre, philosopher; author of Post-Truth and How to Talk to a Science Denier

Discover more of the MIT Press’s books on mathematics